Whelen has been pushing the boundaries of innovation since 1952. The Whelen Archives will explore and celebrate our rich heritage over the last six decades.

Whelen has continuously utilized the most innovative lighting technology within our products. From the halogen lamps of the 1950s to the most advanced LEDs today, we are proud to always be at the forefront of new technology. 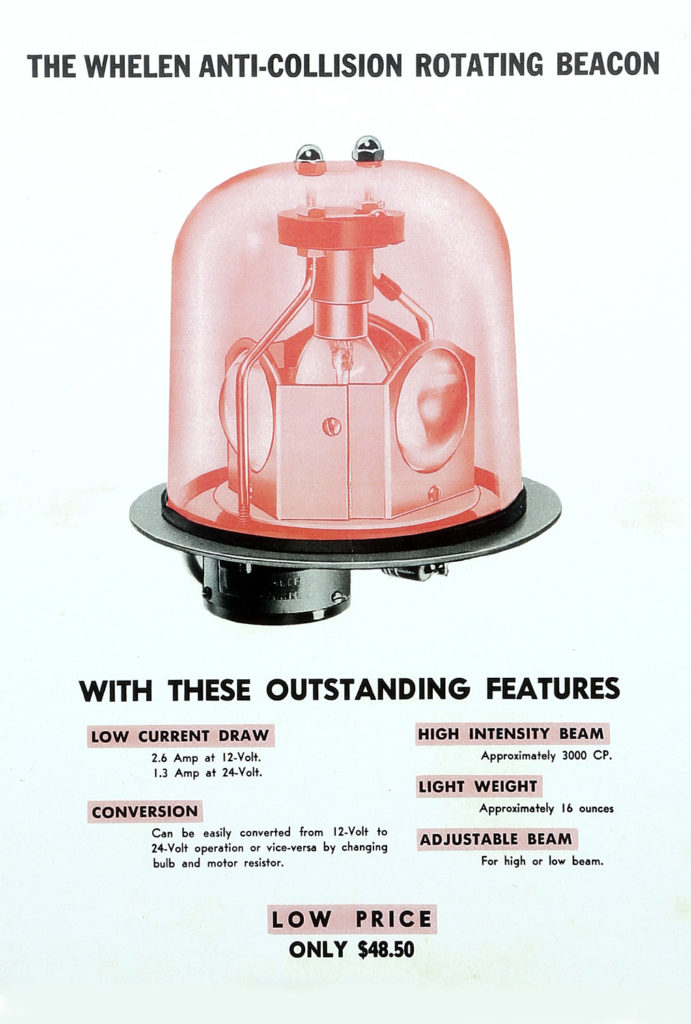 Whelen’s first “anti-collision” beacon featured halogen technology with a reflector. Halogen lights contain a small amount of halogen gas and a tungsten filament. Halogens were the go-to choice for lighting during the mid-20th century.

Halogens lamps were simple to make and easy for manufacturers, such as Whelen, to acquire and use in products.

Halogens were extremely bright for their time. Their high color temperature produced a bright light output – increasing visibility and safety. Lenses were used to change their color.

When compared to their rival, incandescent lights, halogens provided a huge improvement in the life of the product. 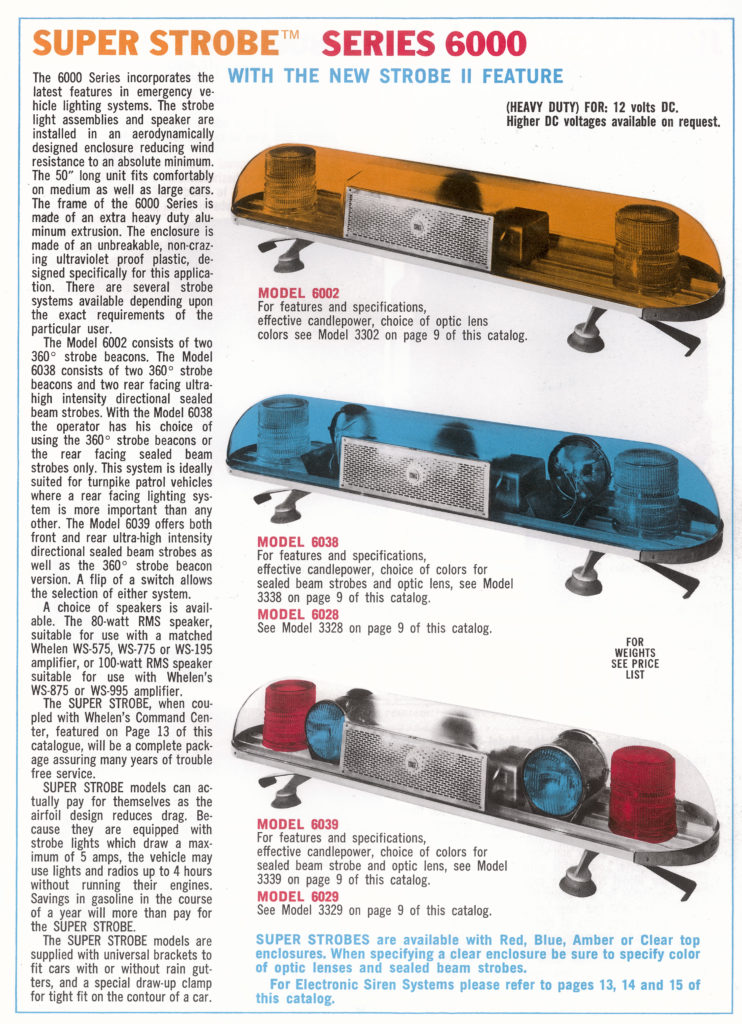 Whelen was the first to introduce strobe technology to the emergency warning industry in 1963, providing more affordable, reliable, and effective products for first responders. Strobe lights typically use flash-tubes and require a power supply to operate. Whelen’s strobe advancements include the first all-enclosed lightbar, our Super Strobe™ 6000 Series.

While halogen lights had to be shut off while on-scene so vehicle batteries didn’t die, strobe lights featured a much lower current draw. This increased visibility and safety while idling.

Strobe lights featured a more focused light output than their predecessor. This drastically increased visibility so lights could now be seen from much further away.

Strobe power supplies had multiple flash patterns built-in so for the first time, users could choose which one they wanted to use.

Whelen was the first to introduce LED technology to the emergency warning market in April 1997 with a messenger sign that was installed into our lightbars. LEDs (light-emitting diodes) are solid-state semiconductor devices that give off light when a current flows through them. Light is produced when the electrons and holes that carry the current combine with the semiconductor material. The LED color is controlled by the energy needed for the electrons to cross the bandgap of the semiconductor. We engineered the very first all-LED lightbar in 2000 with our Liberty™ Series.

LEDs provide optimal visibility compared to the lighting technology of the past. The color of these lights is produced by the LED itself rather than relying on a lens to cover it and change the color.

LEDs feature the greatest number of flash patterns possible, and they flash without affecting the life cycle of the product. Whelen’s LED products feature Scan-Lock™ technology.

LEDs have allowed us to engineer advanced applications and optic technologies such as our SOLO™, DUO™, and TRIO™ optics, ProFocus®, and BroadBand Blue™.

Whelen is proud of our role in bringing lighting advancements to first responders worldwide. We promise to stay at the forefront of lighting developments to ensure every generation has the best technology to increase safety.

The Whelen Archives explores and celebrates our rich heritage and innovations. Learn more about our history here.

Whelen in the Community!

Giving back to and connecting with the communities where we live and work makes us happy! Here’s what we’ve been

A Tribute to Fallen Officers

We have a long history of supporting first responders and causes that align with our mission of protecting them. That’s

Thank you to everyone who visited our booth in the Indiana Convention Center for FDIC 2022! We had a record